Sorry, mySherryFitz is not available on this page

Login or Register to access this feature within mySherryFitz Let us find you the best mortgage

HISTORICAL NOTE
Blackwater Castle, one of the oldest continuously occupied sites in Ireland, is steeped in heritage with a history that extends back some 10,000 years. The Castle has played host to nobility throughout the centuries, being a centre for hospitality from past to present and home to Gaelic Chieftains and Norman Lords. It remains a sought after location with recent visitors including President Michael D Higgins and The King of Pop Michael Jackson. Less welcome visitors in the past include Sir Walter Raleigh who captured the castle in 1580 and Oliver Cromwell who laid siege to the castle in 1649.

Once home to the Viscount of Fermoy and the Lords of the Barony of Fermoy, this magnificent mansion is a now a unique monument of significance. The site’s history spans thousands of years, originally populated during the early Mesolithic period. There is further evidence that the site had been occupied during the late Bronze Age and early Iron Age too when it was known as the fortress of Dún Crúadha.

Blackwater Castle is also a site of spiritual significance; below the castle near the River Awbeg is the Holy Well of St. Patrick.

“Below the castle and near the margin of the river, is a holy well, dedicated to St. Patrick, on whose anniversary a patron is held here: the water is remarkably pure, and is much esteemed by the peasantry for its supposed virtues.”

An excerpt from Lewis’ Cork (1998) book detailing how the well is renowned for its clear and pure water along with being a place of holy pilgrimage.

THE SHEELA NA GIG AT BLACKWATER CASTLE
Sheela na Gigs (Síle na gcíoch in Irish) are figurative stone sculptures of women in the birthing position that were venerated as powerful emblems in ancient cultures across the world. The sculptures are sacred symbols and architectural grotesques which represent fertility in women and in the natural world. Sheela has a clear indentation around the vulva where it has been touched down through the centuries. The dust from rubbing the sculpture was supposed to have magical fertility or healing ability, and this belief is still held in the community.

The Sheela Na Gig at Blackwater Castle is located on the ground floor of the tower house and dates from the early Christian period, maybe as early as the 9th century. The first historical record of the Sheela was documented by ordnance surveyors in 1837 when it was positioned by the river’s edge. It was later relocated to the Castle by 1934, where she has remained since.

BLACKWATER CASTLE
The south of Ireland is dotted with castles, built sometimes as fortifications, and more frequently as places for their lucky owners to make the most of their good fortune in safe and peaceful settings. While some of these are now little more than romantic ruins, others, such as Blackwater Castle, are thriving in the hands of a generation of visionaries. The castle is currently run as an exclusive wedding and banqueting venue with many international clients falling in love with the beauty of the location. The castle is an ideal home to enjoy a piece of Irish history and be at one with the tranquillity of the peaceful setting of this wonderful property.

Blackwater Castle sits regally on the highest point of the grounds, looking out over the spectacular River Awbeg, and its valley, a rich and royal landscape. With the build timeline extending from c. 1190 to c. 1825, this commanding fort is the perfect example of a medieval castle with many of the original Norman features still intact.

The multispecies tree lined avenue, looking down over the vast valley and winding river, leads up to the enchanting castle front.

On approach you are greeted by the Norman tower house. The original round tower which dates from the late 12th Century is currently inaccessible. The Norman tower house built mid-15th Century is mainly intact with the ground and two main floors, the roof and spiral staircase all in remarkable condition. Throughout this Norman Keep, you will find all the standard features to fend off attackers such as uneven steps (trip steps), a murder hole, batter walls, and a garderobe. The roof of the tower gifts panoramic views of the surrounding splendid countryside.

On entering the main residence, the bulk of which to the right forms part of the original medieval hall of the castle dating to circa early 1400’s. To the left a section was added on to the main building circa the late 1700’s. A further addition was made to the main building (now the Piano Room) and was added on circa 1825. The castellated parapets and battlements to the rear continue to be reminiscent of the medieval features which would have protected the Castle in the past.

The accommodation boasts 9 spacious suites, sleeping up to 23 people across the first and second floors. The 6 welcoming reception rooms include a Breakfast Room, Dining Room, Tea Room, a Bar Area, a Piano Room and Library (known as Headquarters). A fully equipped commercial kitchen is spacious and offers the potential to continue a catering enterprise at the castle.

GARDENS AND GROUNDS
Blackwater Castle, built at the tip of this ancient promontory fort, is set on approximately 24ha (60 Acres) of gardens and woodland, with the River Awbeg flowing around the base of the fortress in a horseshoe shape. Mature woodland in a steep valley surrounds the imposing Castle and its courtyard while expanses of neat mown lawn create some lovely open spaces around the castle itself.

1km (approx.) of the flowing waters of the River Awbeg grant you private double bank fishing rights. Fishing enthusiasts can enjoy the delights the waters have to offer, mainly Brown Trout.

To the rear of the castle there is a large stone fronted courtyard, originally forming part of the Norman “outer bailey” with huge potential and with such uses as residential, commercial, and other business types, subject to the relevant planning permission. These spaces were created for the golden age of horse-drawn transport and are exceptionally atmospheric.

The Courtyard is adjacent to a spectacular approximately 1.5 acre walled garden which is is both fascinating and beautiful. The stone arch entrance is captivating due to the draping canopy of wisteria cascading over the gates. The fertile Irish soil encourages a plentiful harvest of fruits and vegetables in the garden every year. Bordered by dense shrubbery, the gardens include variations of vegetable and fruit species such as peach, pear, apple, cherries, blackberries, currants, gooseberries, and raspberries, all wonderfully presented. A quaint greenhouse provides a space of quiet reflection and allows for the growing of exotic fruit and vegetables such as melons and chilli.

LOCATION
The picturesque village of Castletownroche, Co. Cork winds around the perimeter of Blackwater Castle. The village supplies locals with the necessities including a post office, pharmacy, hairdressers, small supermarket, petrol station, pubs and takeaways.

Being surrounded by mature woodland and positioned at the end of a 350m long driveway, the property is very private despite being so close to the village centre.

The castle is on the N72, equidistant between Mallow and Fermoy, two thriving market towns in Cork. It will take an approx. 15 minute drive to Mallow Golf Club and Mallow Town, where there is a wide range of shops, cafés, bars and restaurants as well as national, primary and secondary schools. There is a wide range of sporting activities available in the area, from golfing to fishing, horse riding and racing to hill walking, as well as football, rugby and GAA. The train station at Mallow is on the main line between Dublin and Cork on the N72, while national routes link with the motorway network at the M8 junction, just under twenty minutes’ drive away. Blackwater Castle is both an oasis of tranquillity, and an ideal base in this thriving part of Ireland.

Up to 90% mortgage available.

Request a callback for mortgage options. 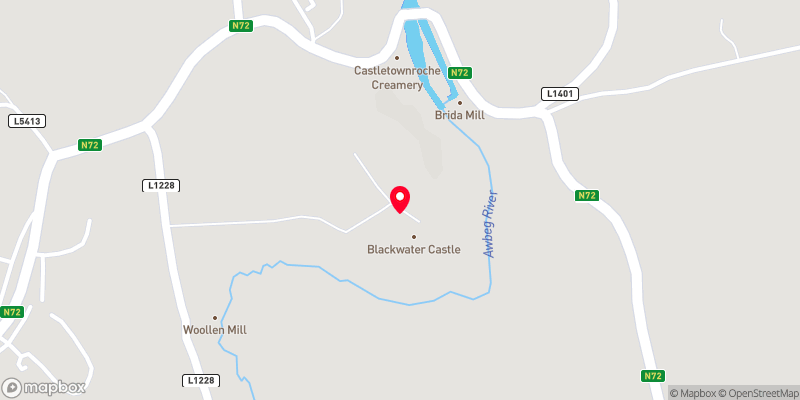 This calculator is for illustrative and guidance purposes only.

The amount you can borrow will depend on your individual circumstances and is subject to lending criteria, terms and conditions.

The limits applied can vary so it is important to contact us to discuss your options.

WARNING: IF YOU DO NOT MEET THE REPAYMENTS ON YOUR LOAN, YOUR ACCOUNT WILL GO INTO ARREARS. THIS MAY AFFECT YOUR CREDIT RATING, WHICH MAY LIMIT YOUR ABILITY TO ACCESS CREDIT IN THE FUTURE.

WARNING: IF YOU DO NOT KEEP UP YOUR REPAYMENTS YOU MAY LOSE YOUR HOME.

WARNING: YOU MAY HAVE TO PAY CHARGES IF YOU PAY OFF A FIXED RATE LOAN EARLY.

WARNING: THE COST OF YOUR MONTHLY REPAYMENTS MAY INCREASE.

If you are a first time buyer who has paid income tax or Dirt Tax in Ireland in the past 4 years you can apply to claim back up to 5% of the purchase price of this new home with the Help to Buy Scheme How to apply and details of revenue eligibility requirements.

10% of the purchase price that must be paid on signing of contracts (less any booking deposit already paid).

Buying property is a complicated process. With over 40 years’ experience working with buyers all over Ireland, we’ve researched and developed a selection of useful guides and resources to provide you with the insight you need..

From getting mortgage-ready to preparing and submitting your full application, our Mortgages division have the insight and expertise you need to help secure you the best possible outcome.